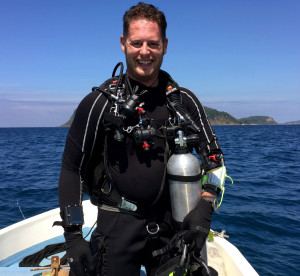 Alex is a marine biologist and oceanographic engineer by training, with multi-disciplinary research interests at the interface between marine ecology and oceanography. He has qualifications and experience in commercial and technical diving in both academic and industrial settings. He received Honours degrees in both Science and Engineering (Marine Biology and Ocean Systems Engineering) and a Ph.D. (Oceanography and Marine Ecology) from The University of Western Australia. He was a Fulbright Scholar and Postdoc at Scripps Institution of Oceanography, UC San Diego, and a Research Fellow in the Atmosphere and Ocean Research Institute at The University of Tokyo. His novel integration of oceanography, isotope ecology and engineering has begun to shed new light on the biogeochemical function, diet shifts, and foraging specialisations of globally threatened marine ecosystems and species.  read more

He has a particularly strong background and focus on coral reefs, with recent work leading to the exploration of proactive management approaches for enhanced stewardship of these vital ecosystems.  His early work quantitatively demonstrated that oceanic nutrient inputs to reefs are essential, but also provided some of the first direct evidence that ecosystem-scale recycling is an ecologically significant process.  This research attracted a number of competitive awards, including the 2011 UNESCO IOC / IMarEST Western Australian Marine Science Postgraduate Award, Australian Marine Sciences Association (AMSA) Allen Award, the Janice Klumpp Award (UWA), an Australian Coral Reef Society Award, and the Oxford University Press Prize for best marine ecology presentation at AMSA 2008. More recent work supported by fellowships from the Japan Society for the Promotion of Science (JSPS), focusing in part on isotope dynamics in captive and wild whale sharks, has led to the development of an enhanced approach for quantifying foraging specialisation in wild populations of a range of enigmatic marine species.  With the support of JSPS, the Sumitomo Foundation and the Nissei Foundation, Dr Wyatt is begun applying new technologies and approaches to the ecological exploration of deep water ‘twilight’ reefs, which represent a new frontier in coral reef oceanography and ecology and have important global implications for reef preservation.  He is a registered expert for the Japan International Collaboration Agency (JICA) and a participant in the JICA-funded “Coastal Ecosystem Conservation and Adaptive Management (CECAM)” project in the Philippines and the US-funded Long-Term Ecological Research (LTER) coral reef site in Moorea, French Polynesia. He is also active in the international isotope ecology community, hosting and chairing the 10th IsoEcol conference in Tokyo in 2016, the first to be held in Asia.  Dr Wyatt has supervised scientific diving operations and led academic and commercial field research in a variety of marine ecosystems worldwide, including in Australia, East Timor, French Polynesia, Hong Kong, Japan, the Philippines, Mexico, Taiwan, and the United States.  He publishes in, and reviews for, top international journals in the marine and oceanography fields, including Coral Reefs, Ecology, PLoS One, Limnology and Oceanography, Marine Biology, Marine Ecology Progress Series, and the US National Science Foundation.

2008 – 2011   Morphological, behavioural and environmental controls on coral feeding: the effect of flow conditions inferred from stable isotope variation.  The University of Western Australia.