A major international collaboration, including AORI researcher Dr. Alex Wyatt and authors from 20 other countries, could help global efforts to overturn recent declines in the world’s shark population by providing greater insight into the feeding habits of the world’s most misunderstood fish.

Led by Dr. Christopher Bird from the University of Southampton, the study published in Nature Ecology & Evolution, used chemical markers in the form of carbon isotopes found in sharks to investigate where in the world they have been feeding – an unresolved question for many shark species. Knowing which parts of the global ocean are important shark feeding areas may help to design more effective conservation measures to protect declining shark populations.

All life depends on carbon at the bottom of the food chain. Carbon comes in three forms or isotopes, and the proportions of two of the most common isotopes vary across the world’s ocean. In the study, 73 scientists from 21 countries compared the carbon isotopes from more than 5000 sharks from 114 species across the globe with those from phytoplankton at the bottom of the food web.

“You’ve heard of ‘you are what you eat’ – well this is more ‘you are where you ate’”, Bird continued. “We were able to show that sharks living close to land and those that live in the open ocean have very different ways of feeding.  The global study used muscle tissues to show that sharks living near to the coast feed locally across a range of different food webs –this is like people living in a city with access to lots of different restaurants in the neighbourhood and no need to travel far to find the food they want. On the other hand, oceanic sharks that are found throughout the world’s oceans, appear to get most of their food from specific areas of cooler water in the northern and southern hemispheres. This is more like travelling long distances from rural areas to spend lots of time eating in a few restaurants in a distant city.

❝Our results suggest that for whale sharks, we can isotopically capture feeding that occurred in the months to years prior to sampling by sampling a range of slow and fast tissues, like blood plasma and fin cartilage, respectively”. Dr Wyatt added that future work looking at multiple tissues is expected to add a temporal dimension, “in this case, not only are ‘you what and where you ate’ but also ‘when you ate’❞.

These findings are very important for Dr Wyatt, who is using isotopes to better understand the open ocean movements and foraging strategies of planktivorous sharks and rays like the whale shark.  “Our results from captive whale sharks, in collaboration with Okinawa Churaumi Aquarium, have demonstrated that we can use carbon isotopes measured in different tissues of one shark to show changes in feeding activity of that individual over time” says Dr Wyatt.

This is because different tissues have different rates of metabolic turnover, and can thus reflect feeding over different time scales.  “Our results suggest that for whale sharks, we can isotopically capture feeding that occurred in the months to years prior to sampling by sampling a range of slow and fast tissues, like blood plasma and fin cartilage, respectively”. Dr Wyatt added that future work looking at multiple tissues is expected to add a temporal dimension, “in this case, not only are ‘you what and where you ate’ but also ‘when you ate’”.

Such increased understanding of global shark feeding is considered vital for their conservation. “With over 500 known species around the world, sharks are certainly amongst our most diverse and misunderstood group of fish but we still have limited knowledge of their habits and behaviours, particularly relating to feeding and movement|” said Dr. Christopher Bird. “Over the last 50 years, the pressures of fishing and habitat degradation have resulted in declines amongst some of the world’s shark populations, the effects of which are also not fully understood.” 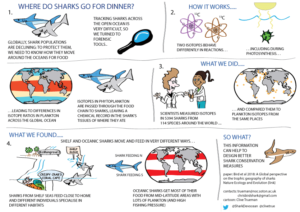 Senior author Dr Clive Trueman, Associate Professor in Marine Ecology from the University of Southampton added, “The results have important implications for conservation. Globally, sharks are not doing well. Many shark populations have declined in the last few decades, particularly in the wide-ranging oceanic sharks that are targeted by fishing boats and caught accidentally in tuna fisheries as “by-catch”. Governments are now creating large marine protected areas around the globe, which help to reduce fishing, but most of these protected areas are in tropical waters, and may not provide effective protection for oceanic sharks.”

“Sharks urgently need our help, but to help them we also need to understand them. Our study has helped by identifying important shark feeding grounds. New technologies like satellite and isotope tracking are giving us the information we need to turn the tide on these beautiful and fascinating animals.”